Hello dear reader(s) and welcome back to another instalment of Nessa reads and reviews! In this issue I’m reviewing Locke & Key – a comic book series written by Joe Hill, illustrated by Gabriel Rodriguez, coloured by Jay Fotos, letters by Robbie Robbins. Although I like comic books and manga in general, this is the first time I’m reviewing one of these for the blog. Or reviewing them in general, besides telling someone I read it and I liked it. 😀 So I do apologise if my review of a comic book series is not in accordance to comic book review standards (is there such a thing?) I’m just being me and trying to sort what I think about this series. 🙂 Business as usual in château de Nessa. 🙂

Locke & Key is an American comic book series and the first collaboration between the writer Joe Hill and the Chilean artist Gabriel Rodriguez. Jay Fotos was the colourist and Robbie Robbins did the letters for the series. Joe Hill’s name might be familiar to you, he’s an amazing writer of horror fiction (including comic books). Some of his works include Heart-Shaped Box, NOS4R2, The Fireman, Strange Weather… You can find out more about his work at his website. As I already mentioned, Gabriel Rodriguez is a Chilean artist, he is best known for his work on Locke and Key and Little Nemo: Return to Slumberland. Both those comic books won an Eisner Award. If you want to see more of Rodriguez’s works check out his DeviantArt page.

Locke & Key tells the story about the generations of Locke family and their friends. The main series focuses on the latest generation of Locke children: Tyler, Kinsey and Bode as well as their friends and nemesis. Additionally, we get to see previous generations of the family and how their actions influenced the story. However, the Locke family is only one part of the structure, the other is Keyhouse – the Locke family’s New England mansion with wondrous doors that, when opened with magic keys, lead to all kinds of “weird bollocks” to quote DCI Seawool. 😀 The main series consists of 6 volumes or story arcs:

In addition to the main series Hill and Rodriguez did a series of one-shots known as The Golden Age arc. So far there are only 3 (Open the Moon, Grindhouse and Small World) but, according to the authors, more are to follow. *fingers crossed*

One of the reasons I was drawn to this comic book series and why I wanted to read it was the combination of a riveting and layered storytelling coupled with detailed and wondrous drawings. Not only did their blending create a captivating and engrossing story, but it also unlocked (heh, puns) a wonderful world filled with fantastic stories and characters. Like I mentioned before, Locke & Key is primarily a story about family – but not just about someone’s biological family, but also the family you create by forging relationships with other people. The relationships between the Locke family members, their relationships with their friends, acquaintances, and nemesis make this story credible and real. However, another interesting point is to see their introspections, and the actions that drove them to think about who they are and who they want to be. To reflect and think about themselves and to strive to be better people, or the best versions of themselves as they possibly can. That process is uncannily captured both by Rodriguez’s art and by Hill’s storytelling.

Locke & Key is one of those magnificent examples of a beautiful collaboration. 😀 Hill’s story is superb, it can stand on its own without any illustrations. At the same time Rodriguez’s art is powerful, the sheer amount of attention to details is incredible and makes the images come to life… The words and the art don’t need each other to shine, but together they are the most exquisite, captivating and magnificent thing you will ever see! You can speed through the comic because you’re so entangled in the story and you want to know what happens next. And the narrative itself is a page turner! Or you can go slow, admiring the artwork and savouring the story. As the reader you will always be torn by those two states, but you can always come back to the volumes and enjoy them again and again.

As you might have noticed, the reader’s dilemma is one of the best indicators that the book/comic book you’re reading is excellent and that the whole thing is going places. That feeling you have when you simultaneously want to know what happens next and how it all ends, but at the same time you want to stay where you are and enjoy the moment. That’s when I know it’s magnificent! And Locke & Key is certainly a magnificent collaboration and I sincerely hope that the authors along with their team will get together again and create more stories form this world. 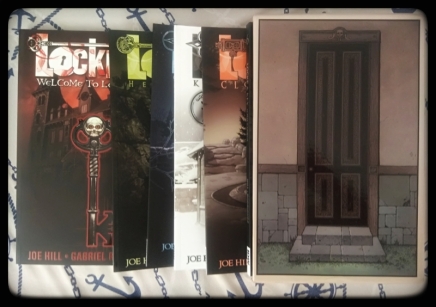 If you’re into comics and you haven’t stumbled upon Locke & Key I’d recommend checking it out. I cannot heap enough praise for the artwork and the storytelling. If you’re not really into comic books and think that they are just for kids and teens let me help you correct that mistake ASAP! Not only is Locke & Key a multi-layered engrossing narrative with detailed artwork, but the combination of the two breathes a different kind of life making this story a whole new ballgame by itself! So you should definitely be on the lookout for this series and read it as soon as you can! If you have read this series please let me know in the comments or on Twitter (you can find me @NarratriceNessa) what you thought of it? What was your favourite issue? Which key would you like to have? I’m all about that Head Key! 😀 Until next time dear reader(s)!

One response to “Review: Locke & Key”